The hard lives of the porteuses de pain 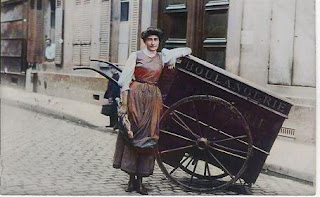 From the late eighteenth century through World War II, women delivered bread in Paris and elsewhere. While men are exceptionally shown doing this, the great majority of bread porters were female: porteuses de pain. Their role in French life was paradoxical: they were frequently shown in ads and images and referenced as one of the familiar sights of the morning, so that one could readily get an idealized view of them, something like the chimney sweeps in “Mary Poppins”; yet like the chimney sweeps they more often than not had hard lives and many recognized this at the time. 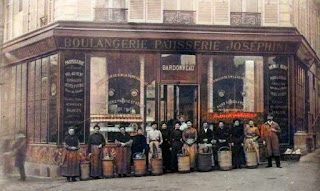 Their work alone was demanding. They had to get up early, load themselves up with bread at the bakers and not only take it around to customers, but most often to climb innumerable stairs. One writer claims that they had to be young and did not last long in the profession, but in fact some were past seventy; the youngest were under fourteen. They were generally said to be poorly paid, though at least one source suggests women in baking in general were paid better than many other low-wage workers. 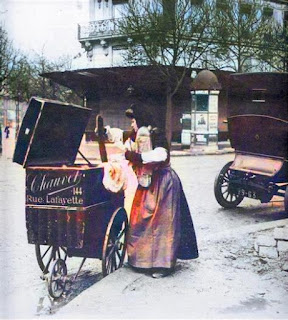 Often they worked more than one job and were married to men who were themselves low earners. Some supported alcoholic husbands, though it is not clear if this was any more true of them than of many other poorer women. Many had problems looking after their children, as low-paid workers still do today; in at least one case, one had to completely surrender her daughter. Those who stayed with their mothers sometimes had tragic fates. 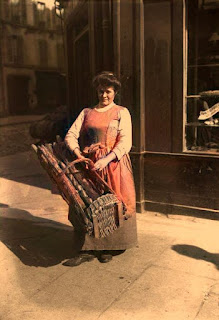 They often appear in medical cases, frequently with gynecological problems which were probably excruciating and often accompanied by a constellation of other symptoms which sometimes resulted in death for what in themselves would have been minor causes. But the only malady anyone specifically cites as typical of their work is varicose veins. 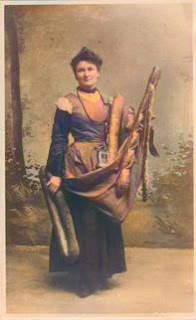 Their activities took them all about their neighborhoods and so they were known for hearing and spreading gossip. Often too they were the first to discover something such as a crime or a death. 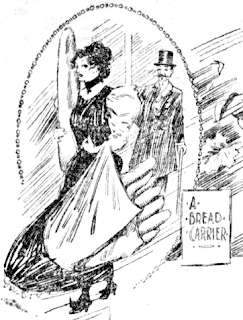 Since they collected money for their employers, when they were robbed one might expect it to have been for money. But in fact it was their bread people stole, often predictably desperate people. It is surprising this did not happen more often, given that they were required to leave their wagons downstairs in many cases while they climbed stairs to deliver bread, It appears that people in the neighborhood were happy to help watch their goods. 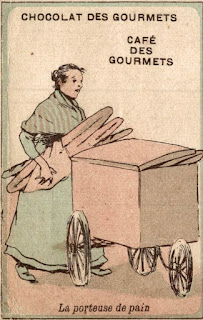 When they committed crime themselves, it was most often in yielding to the temptation to divert the funds they collected. One young woman did this a second time even after her boss had forgiven her the first, and yet was acquitted – because, it turned out, she had found a wallet and sought out its owner. It was rare for them to be violent, but one not only shot at a police secretary, but did it in the police station. 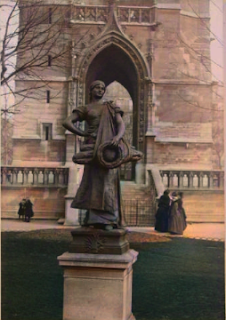 Artists and writers frequently took them as a subject, sometimes in paintings, at least twice in sculptures (one of which stood in the Square St. Jacques until it was melted down during World War II), in a number of (mainly bad) poems, a few plays, but most memorably in a novel called La Porteuse de Pain, by Xavier de Montépin, a writer similar to, if less enduring than, Dumas. 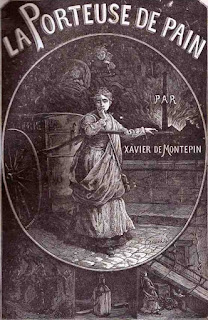 Not only was the novel immensely successful, but the play he and a partner drew from it would be widely performed for years and turned into several movies, as well as a TV miniseries in the Seventies. Several other novels and plays would at least mention them as well. 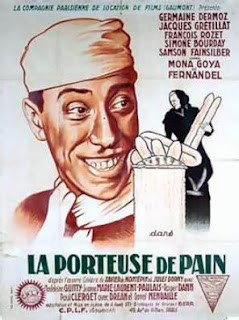 The porteuses, then, were an integral and intimate part of French, especially Parisian, life. If they have been almost completely forgotten today, they deserve renewed attention, be it for their role in French baking, their influence on French art or what they tell us about working class life in the nineteenth and neighboring centuries.

They Came Bearing Bread: The Hard Lives of the Porteuses de Pain